Lucien Hougardy was born on 13.02.1912. While we know nothing about his childhood, we do know some things about his captivity: he was drafted in 1939 at the beginning of the war, as part of the TTR (Troops of Radio Transmission). In 1940 he was transferred to the Belgian coast with his corps, but on the way there they were captured by the Germans near Vilvoorde. They were loaded into cattle wagons, which then left for the Baltic Sea. First stop: Stalag 1 A near Stablack. Here they were divided up again, Hougardy was sent to Stalag VIII C near Sagan, from where he was sent to Görlitz, to Stalag VIII A. The distance between Stalag VIII C and A was 70 kilometers.
Lucien Hougardy had to cover this distance on foot. The hut which Hougardy and his fellow prisoners had to live in was full of vermin, and the Germans only gave him water to get rid of the plague.
The day was strictly divided up by the German guards; in addition to the hard and exhausting work, there was merciless punishment and little food. Nevertheless, there was great solidarity among the inmates – the barbed wire fence could not stop the other prisoners from sending potatoes and bread to the Soviet POWs. In one of the packages he received from the German Red Cross was syrup, in which, as he later liked to tell, a hair of his stepsister hung, which amused him greatly. An ankle boot was also included. The second one reached him in 1942, two years later.
Hougardy himself worked in a number of commands during his imprisonment, for example in Kommando 144, which was a farm. Other places where he was forced to work were:
• A salt mine
• A country estate
• Aircraft factory Peter & Zohne, in today’s Vrchlabi; in the factory they discreetly damaged the wings to make it more difficult for German soldiers to fly.
• Stalag VIII A; collecting wood, cutting stones for road construction
• Görlitz; shoveling snow
In his spare time Hougardy was part of the theater group and trumpeter in a band in Stalag VIII A. His instrument, however, was stolen by the Germans at the end of the war, as it was made of metal. His trumpet was likely melted down to ammunition. He was also present at the premiere of Messiaen’s “Quatour pour la fin des temps”, an incredible experience for him, as he told later.
Among his goals was also escape. His plan was to return to Belgium via the largest German cities. He wrote these down on a piece of paper, but was seen by a German worker. A guard kindly warned him, which gave him the opportunity to destroy the evidence. He was then brutally interrogated for 48 hours (he was shined with a lamp in his eyes, guns pointed at him, etc.). Despite the inhuman treatment he endured without making a confession. This interrogation was the reason for his significantly shorter life. During the interrogation he was beaten so badly that his ribcage was permanently shifted down five centimeters.
When the camp was liberated by the Allies in 1945, they brought him back to Belgium via railroad tracks, where he arrived sick but happy on May 8, 1945 at 10:00 pm.
In 1947 he suffered a pneumothorax, which brought him close to death. A Japanese doctor gave him 25 years and the recommendation to move to Switzerland because of the good air. For the rest of his life he worked at “ONIG” (Ouevre National des Invalides de Guerre), an association which helped other former POWs. He never left Switzerland, despite his wish to return to Görlitz, because he would have lost some years of his life due to the air change.
Lucien Hougardy died in 1968 at the age of 56 in Switzerland. The captivity took its toll on his body.
Many thanks to Paule Van der Straeten for her willingness to tell us about her grandfather. Mrs. Van der Straeten has been in contact with our association for several years now, she has also visited Görlitz several times, for example in 2014 for the January concert, where she gave a lecture about her grandfather (picture below). So also at the Worcation in 2016, where she also shared the history of her ancestor (pictures also below). 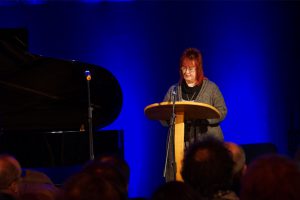 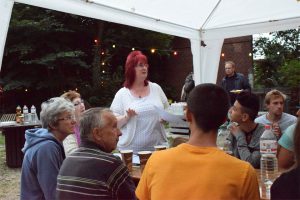