Ensemble wanted: 80 years “Quartet for the end of time” 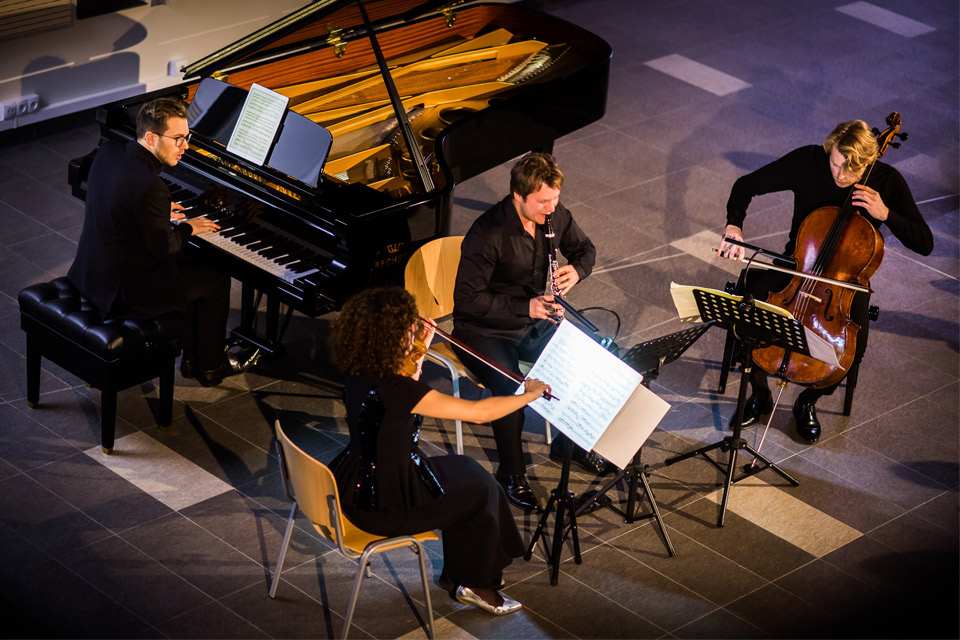 Performance of the “Quartet for the End of Time” on 15.01.2020 in during the 4th International Messiaen-Days Görlitz-Zgorzelec

Goerlitz-Zgorzelec. Myung Whun Chung, Peter Hill, Roger Muraro, Bettina Aust – four of 52 names that are connected in a special way with a place and a musical event. They are the names of excellent soloists who played Olivier Messiaen’s “Quartet for the End of Time” at the place of the premiere – on the grounds of the former German prisoner of war camp Stalag VIII A on the outskirts of Görlitz-Zgorzelec.

Since 2008, the premiere on 15 January 1941, when Olivier Messiaen and three fellow prisoners presented his work to an audience for the first time in the camp’s theatre barracks, has been commemorated there annually. Even today, the musicians of the Sächsische Staatskapelle Dresden still remember the 15th of January 2008: a tent in the snow, cold fingers, the wind that shook the tent, almost 400 people from Poland, Germany and the Czech Republic who were fascinated by this unusual commemorative concert.

The Görlitz association Meetingpoint Music Messiaen e.V. and the Zgorzelec Foundation for Remembrance, Education, Culture have since then year after year not only commemorated Messiaen and its premiere, but above all 120,000 prisoners of war and forced labourers who suffered  during the war 1939 – 1945 at Stalag VIII A; more than 10,000 men died here and are buried anonymously in a mass grave not far from the performance site.

Prominent soloists and renowned ensembles have since performed these eight movements for violin, clarinet, cello and piano at this venue, as have young and as yet little-known virtuosos. And although the January concert has no longer been performed in a tent since 2015, but in the newly created European Centre of Remembrance, Education, Culture “Meetingpoint Music Messiaen”, it remains an unusually intense experience – for musicians and auditorium alike.

Since 2017 the “Quatuor pour la fin du temps” has been embedded in a series of concerts, lectures and guided tours. The “International Messiaen Days Görlitz-Zgorzelec” are developing into a stimulating and high-profile annual kick-off event for those interested in culture and friends of contemporary music.

January 2021 will mark the 80th anniversary of the premiere. For this special occasion, Meetingpoint Music Messiaen is holding a competition: We are looking for the ensemble that will perform Olivier Messiaen’s quartet on January 15, 2021. Musicians from at least two countries will be selected, ideally from Poland, France and Germany. They must not be older than 35 years at the time of application. The closing date for applications is 31 July 2020.

The winners of the competition may not only perform Messiaen’s quartet on 15 January 2021 at the venue of the world premiere in front of an international audience. They are also invited to Görlitz/Zgorzelec on the weekend of August 29th, 30th and 31st. Here they can experience a film production for the culture channel ARTE. The focus of the film is the recording of the “Quartet for the End of Time” with four outstanding musicians from France and Germany: Pierre-Laurent Aimard (piano), Jörg Widmann (clarinet), Jean-Guihen Queyras (cello) and Isabel Faust (violin).

The fees for the performance on 15.01.2021 will be negotiated with the winning ensemble in August following the jury’s decision.

During an exclusive guided tour, the prizewinners learn about the history of Stalag VIII A and the place where Olivier Messiaen lived as a prisoner of war 80 years ago.

Interested musicians can send their application with artist’s vita and references by e-mail to the organizers: music@themusicpoint.net.

Further information about Messiaen’s work, the premiere and the prisoner of war camp Stalag VIII A at  www.meetingpoint-music-messiaen.net and www.messiaen-tage.eu