Posted by Meetingpoint Music Messiaen at 12:46 in POW, Stalag VIII A 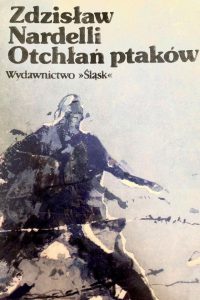 The text describes Z. Nardelli’s stay as a prisoner of Stalag VIII A and is marked by a period of struggle to preserve his identity in very difficult camp conditions, a period of extraordinary cultural development and great initiatives.
Stalag VIII A was another place of imprisonment of Z. Nardelli, to whom he was transferred from Stalag VIII C Sagan (Żagań) on May 20, 1940.

Stories from the life in the camp can be found in the autobiographical novel “The abyss of birds”.
Nardelli’s narration is lively, detailed, full of dialogues, names. It describes the relations between prisoners more than it is an assessment of the imprisonment itself, it does not express the author’s opinion directly, but it is a valuable source of knowledge about those events.

In the spring, the camp began to fill up. Transports of Dutchmen, Belgians and finally the French came. Screams were reaching the Polish barrack. The Germans took over Europe. Hopes faded away.
POWs were wandering around the camp. Narrow paths determined the direction of movement. These paths thickened, intertwined around a centrally located kitchen. It stinks of carrion, fermented potatoes, the sweet smell of boiled beets. Concrete containers stood in the density of these fumes. Bone remains were thrown into them. Clouds of flies were hovering over the heads of those who were caught. They extracted boiled horse bones, bit off the leftovers of tendons, bite off cartilage and suck out the marrow. They fought over these, ripped them out of their hands.

Before the prisoners from the Netherlands, Belgium and France were brought to the camp, the camp was practically occupied only by Poles. They had the privilege to use the camp library. Due to the overwhelming majority, it was called the “Polish library”, but it should be remembered that it contained mainly German and French books.

“Sienkiewicz, only in German. “Ohne Dogma”. You won’t find anything to comfort your heart”.

Nardelli was entrusted with the task of running a library, where the intellectual life of the camp was concentrated and important connections were made.

– Is there anything interesting? – asked Kiedroń when closing the door.
– See for yourself.
German books prevailed in the chests, mainly albums. Large formats from the September campaign, with photographs of a massacred country, burning Poland, cruel, posed photographs. Lots of notes.

Nardelii further mentions the beginnings of a friendship with the French composer Olivier Messiaen. He presents him as a loner, seeking silence, notes his piety and concentration.
Nardelli, as library manager, was asked by French prisoners of war to look after Messiaen. He decided to hire a musician as a library assistant.

However, what attracted Nardelli the most was his creativity. The contact with Messiaen was an inspiration for a wonderful initiative which turned out to be “Polish Evening”, i.e. an evening of Nardelli’s poetry presented together with fragments of Messiaen’s work “Quartet at the End of Time”, on which he worked in the library shelter. It took place in mid-December 1940.
The second name of this event is, like one of the titles of Nardelli’s poems.

It is worth mentioning that he translated Nardelli’s poems for Messiaen into French so that he could get to know them, prisoner Jan Sokal. An interesting fact is that Messiaen called one of the parts of the quartet “The bird’s-eye abyss” or “L´Abime des oiseaux” .

The evening was one of the most interesting meetings that were held on the camp grounds. Lieutenant Bull described the concert as shocking and unique. Olivier’s music was difficult, captivatingly fitting in with the poetry of the Polish poet. The squealer recited slowly, emphatically. Impressed by the beauty of discoveries unknown to him so far, undefined by the possibility of sounds, Kiedroń listened with fascination.

The preview of the performance of the Quartet at the end of time was the basis for the organisation of the next event on 15 January 1941, where it was performed in full. In the camp newspaper Le Lumignon, a masterpiece was announced.

The time of imprisonment was undoubtedly a time of suffering, which was dealt with in various ways. During his stay in the Stalag, Nardelli notes an example of intellectual fun.

Do you, Mr Sorbet, know an outstanding Polish writer. Self-taught, a lumberjack from the Lithuanian primeval forest: Czeslaw Pipol? He was a great symbolist poet, Verlaine´s dwarf,” he asked seriously.
On the anniversary of our champion, I would like to give a lecture to the French people. I would be obliged if such an eminent expert as you would like to take part in the discussion.

He gave an ironic lecture in the packed Nardelli Room, strengthening Polish-French contacts in Stalag. The records show, however, that this was a completely fictional figure.
It should be mentioned that the events were a response to the propaganda lectures organised for prisoners in Stalag VIII A, which Nardelli also mentions in his novel.

The meeting started with the screening of films. Some mass gymnastics during the party reunion. The emission of this movie was prolonged indefinitely. It was followed by scenes from French villages.
Aspirant Krebs has silenced the room. He started a conversation. He talked about the German minority, its right to unite. The lecture was full of mysticism, clichés about liberated dignity, cult of the will, the value of the race.

On 29 January 1941 a new stage in the life of a prisoner of war began for Nardelli. It was the day of deporting all Poles from Görlitz deep into Germany. Messiaen was soon released from the camp, but Nardelli’s captivity continued until the end of the war.