He carries out his obligatory military service in Marina in Venice. Here on 8 September
1943 he is captured by the german troops and he is conducted to Thorn in Poland. Interned
at Stalag XXA, he stays there until the transfer to Görlitz.
At Stalag VIII A he is obliged to work in a bomb factory in Petersdorf (Piechowice –
Poland). Circa 200 men are victims of forced labour and they are divided in 50units.
The rules are very strict, for example they must not speak to the other foreign prisoners.
Because he is a qualified shoemaker, more precisely a leather-cutter, Renato is employed in
a shoe factory. Three sons of the factory owner died in war and the factory needs a new staff.
Two Slavic boys work with Renato.
The life in Stalag VIIIA is hard: often ill, the prisoners suffer from hunger and cold.
One night, three mates from the barrack try to steal some potatoes, but the german soldiers
notice them and drag the three prisoners off to the bitter cold.
Renato and the other internees never see them again and they believ that their friends have
been killed.

During the imprisonment Renato tries to keep in touch with his family and his girlfriend
Lina.
The letters are strictly supervised by the Germans. Often Renato and the other prisoners
have to lie about the true state of their health, in order that the exchange of letters is not
interrupted.
On 27 March 1944 Carlo, the father of Renato, writes: „We received your letter, where you
let us know how excellently well you are keeping“. In 1945 the Russian army comes to Görlitz and invades the Stalag VIIIA.
Renato and the other surviving prisoners are moved to Budapest, where they are delivered to
the Americans, with them the journey to Italy begins.
On 22 October 1945 Renato arrives in Naples: it is the day he has always dreamed of! (7.)
When Renato is in front of his parents house, emotion blocks him and he cannot climb the
stairs.
For a long time the family has received no news from him and they think that Renato is
dead. His brother sees him, but he doesn’t run to Renato, because he is so malnourished and
slimmed down he is unrecognizable.
A few moments later and… the joy explodes in a long embrace.
The days, months and years to come aren’t easy.
The imprisonment has left its marks on Renato, who refuses to sleep in his bed. Instead he
crouches down on the floor even though his mother invites him to sleep on a cosy bed, every
evening.

The war has spread destruction and poverty, and has killed many friends and relatives of
Renato. All but one, who has saved himself. His name is Africano Ottavio.
He was a co-prisoner in the Stammlager VIII A of Görlitz.
On the 4th July 1945 he sends a letter to the family of Renato and “…with the hope that
Renato could answer with his own hands…” he waits for a response.
Unfortunately, this response never arrives because Renato has changed, he feels lousy and
only wants to forget.
“I wasn’t the same anymore!” he will respond to his children and grandchildren, years
after.
But he will carry the letter in his wallet forever.

The 24 July 1950 Renato e Lina get married.
They get on the ship and smile. One last photo 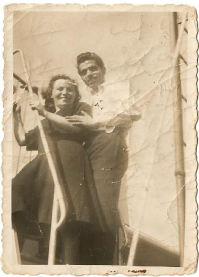 prior to the saling and let’s go!
A new journey has begun for them, a journey that will bring them away from all the
suffering and fear, that the war has brought.
They will travel so happily, fallen in love and be united for the rest of their lives.