Posted by Meetingpoint Music Messiaen at 13:06 in POW, Stalag VIII A 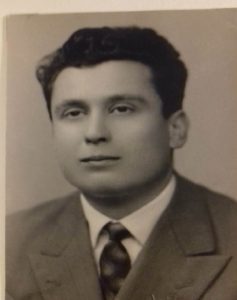 Giuseppe Gonneli was born on 01.03.1924 in Siena, Italy. While we know nothing about his youth, we can safely say that he was called up on 19 May 1943. A few months later, on 09 September 1943, he was captured by the Germans in Albano (near Rome). The reason for this was the lack of orders from the headquarters and the monarch, which allowed the Germans to capture thousands of Italian soldiers without much effort, and after his capture Gonneli was kept in a cattle wagon with many other soldiers. On the journey through Florence he threw a piece of paper with his name and address out of the wagon in the hope of reaching his family. A man found the piece of paper and contacted his family. Giuseppe visited him after the war to thank him.

That same month Gonneli was transferred to Stalag VIII A, where he was to stay until his release in May 1944. Unfortunately we do not know much about his imprisonment. He reported that during his time in Görlitz he had to work with little food and in cold weather. Like all prisoners, he did not have appropriate clothing.
After his imprisonment he suffered from tuberculosis, which is why he spent several months in a military hospital in Italy.
After the war he found a job as a doorman in a hotel in Siena, got married and had two sons and two daughters each. His son thought that Gonneli was not resentful. He always said that he had suffered because of the war and not because of the Germans. When Italy was not playing football, he was happy to support the German team.
Giuseppe Gonneli died on 7 December 1994.
Many thanks to Luca Gonneli, who is still looking for more information about his father Giuseppe Gonneli and who provided us with this information